UK Drill music, characterized by high-BPM, trap-inspired beats and gritty tales of estate life and violence has been under fire from UK police and politicians for months now.  The oft-repeated justification is that it “glamourises” and “incites” violence. The moral panic surrounding drill music was brought to a wider (i.e., non-UK) audience in April after a group of teenagers were arrested while filming a video for Balistik’s “Who’s Next”. Caught on film, police approach the group with guns drawn and a helicopter can be heard circling in the distance. The BBC and UK grime artist Giggs posted the video on social media, which helped bring the hysteria surrounding drill music beyond London. The hysteria surrounding drill music has continued throughout the year and it is not only ridiculous but racist, too.

What Exactly is Drill Music?

UK drill is an off-shoot of Chicago drill music, which rose to prominence in the city early in the 2010’s. The term was coined by rapper  Pacman, who serves as the inspiration for the name of the director who was filming the Balistik video above (PacmanTV). Despite coining the term, Pacman is mostly a local figure, and artists like Chief Keef, Lil Reese, and Lil Durk helped popularized the genre. Kanye West (also from Chicago), Rick Ross, Pusha T, and Big Sean all collaborated with drill artists early in the decade. Producer Young Chop, is perhaps the most emblematic producer of the Chicago drill scene.

Eventually, the drill sound made the jump across the pond and caught on in London’s Brixton neighbourhood in 2012. It has since spread around the housing estates in London and the surrounding area. The most often name-checked American drill artist in the UK drill scene is Lil Durk, so I think it’s safe to say that he has been a huge influence on the scene.

UK drill developed around South London’s Brixton, popularized by crews such as 67, 150, 410, and 86. UK drill features higher BPM than Chicago drill, generally clocking in at the 140 BPM reminiscent of UK grime. Another notable absence from UK drill, is the heavy use of auto-tune popular in North American hip-hop. UK drill features more traditional unedited vocal delivery and rapping. The best known example of the UK drill sound outside of the UK is probably Big Shaq (the pseudonym of comedian Michael Dapaah)’s “Man’s Not Hot.” A less satirical example is probably Loski’s “DJ Khaled” (directed by PacmanTV).

In May, Metroplitan Police Commissioner Cressida Dick and gang crime chief Jim Stokley announced that in an effort to curb violent crime in London, that drill artists would be “treated like terrorism suspects.” In addition, over 30 drill videos were taken down from YouTube for supposedly inciting violence. Even more troubling, Stokley’s desired use of currently-existing terrorism laws means that there needs to be no link between an actual crime and the music or video which supposedly incites violence:

“He said that in tackling online threats, existing legislation used for terrorism may be employed – legislation for which, crucially, there does not need to be a proven link between the incitement of violence and its realisation. In other words, with minimal justification, police will be able investigate anything labelled ‘drill.'” (Source)

In the months following, the hysteria surrounding drill music has unfortunately only continued to grow. The direct result of this type of thinking (and language) leads to situations like what happened during the filming of the “What Next” video discussed at the beginning of this post. Anything that is labelled “drill” is cause for suspicion and along with stop and search laws, which already disproportionately target young men of colour, further criminalizes the sheer act of existing as a poor young black man in the UK.

“As we have seen, the incitement to violence in some of the drill music now about on the estates can be lethal.

We can’t have it, and no social media company like YouTube, Snapchat, or Facebook should want anything to do with it. These large and influential companies have a moral responsibility to not promote violence and misogyny to our young people.”

He goes on to add that, “We absolutely should and could harshly censor what children see.” In true The Sun fashion, after the interview the article continues to post cherry-picked and incendiary statistics in an effort to drum up racist sentiment among its readership. While offering no source or statistics, the article claims that, “The Met Police has linked drill rap music to a surge in gang-related attacks and have requested more than 50 videos to be removed from YouTube in the last two years.” The Sun goes on to reference the exceptional case of the 1011 crew: “Drill music from one band – the 1011 group – is already banned from social media following a court order back in June. They have to give police notice to any song they want to put on social media.”

In June, several members of the 1011 crew were banned from making music without police approval under a CBO (Criminal Behaviour Order): “Five members of west London drill group 1011 must obtain authorisation from Scotland Yard before recording or performing tracks and are prohibited from writing lyrics deemed by officers to ‘encourage violence’.” In and of itself, this is an obscene over-stepping of legal boundaries and effectively criminalizes music and artistic expression.

These type of wide-ranging (and vague) CBOs have become increasingly popular and more and more often are being tacked on to charges. In June, Detective Kevin Southworth described the CBOs as unique, celebrating that it was: “one of the first times, if not the first time we have succeeded in gaining CBOs that take such detailed and firm measures to restrict the actions of a gang who blatantly glorified violence through the music they created.” I want to note that Southworth’s statement does not even go so far as to claim that the 1011 crew had incited violence, or encouraged its perpetration through their music, but merely that they “glorified” it.

By September, when eight more men were arrested and convicted of felonies, the type of wide-reaching and restrictive CBO that was seen as unique in June, seems to increasingly be becoming the norm. In a statement, Constable Steven Renny claimed that, “We are increasingly applying for and being granted Criminal Behaviour Orders to stop young people posting videos and audio online which promote gang activity and violence.” Renny goes on to claim that he is not interested in curtailing young people’s “artistic expression,” but, “when music is being used to encourage violent attacks we must act, as the public would rightly expect us to do so.” Again, as with Southworth’s statement, the language shifts from the prosecution of the group based on actual crimes to the vague language of encouraging violence.

In an October case, a group described by the Daily Mail as a “drill rap gang” was “banned from riding bikes, wearing hoodies and making rap ‘drill videos’ as police crackdown on drugs and anti-social behaviour.” The article goes on to claim that: “In Grays town centre in the past year there were nearly 300 incidents of anti-social behaviour along with large scale group disturbances and more than 100 drug-related incidents.” No numbers are given of how many of these “anti-social” behaviours the members of C17 were involved in. It also doesn’t specify exactly what classifies as anti-social behaviour. Also, in a telling rhetorical move, it lists “drug-related incidents” alongside supposed instances of “anti-social behaviour” and “large scale group disturbances.” Listing these statistics side-by-side paints a correlation where there may not be one. In fact, the article itself marvels: “Incredibly one of the videos of C17 showed the gang members as they performed their raps directly in front of Essex Police vehicles.” The Daily Mail author cannot believe that these young black men are allowed to be in public and around the police without being arrested or brought in for who-knows-what offence.

In addition to being banned from riding bikes or wearing hoodies, a number of the young men arrested were banned from entering certain public areas of the city: 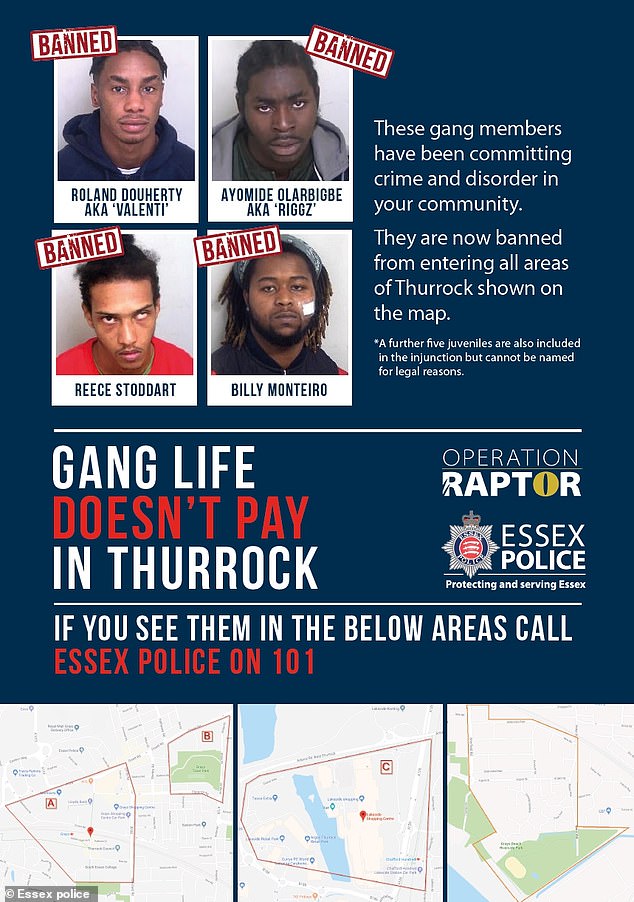 The restrictions being placed by CBOs against these young men violate their fundamental rights as UK citizens as far as I am concerned. It is absurd to not only police the actions of these men, but to also police their dress, their artistic expression, and their right to be in public. In addition, the Daily Mail article makes no distinction between the drug-related crimes the men have been charged with and their participation in recording rap music. To the Daily Mail, and, increasingly, the police, the two are the same thing.

In yet another October case, The Times claims that “violent ‘drill’ rap” inspired a “violent robbery” carried out by a 15 and 16 year-old. Featuring a still photo from a drill music video, the article goes on to explain that “The pair, who cannot be named because they are under 18, stole 35p and an 18-bottle pack of Bud Light beer.” If not for the drill angle, I’m sceptical of whether The Times would have devoted an entire article to a theft of less than £10 in total.

An article in the Epoch Times points out that drill music, rather than glorifying violence, is a reflection of reality. The article quotes Branden Tatum, a Chicago radio personality, who suggests that, “They [drill artists] are just saying what they’ve been through, telling their struggle on how they have to live their life.” Going one step farther, Charlie Ransford of Chicago-based non-profit Cure Violence, suggests, “The music, rather than causing it, is more characteristic of people already wrapped up in violence.”

Recently murdered UK drill artist Siddique Kamara translated the issue to the UK scene thusly: “But knife crime and gun crime has been going on way before drill music, so if you want to talk about 10 years, 20 years, people were still getting cheffed up [attacked with knives].”

Rather than addressing the underlying issues with marginalized black communities in the UK that drives young men to gang life and violence, the current approach seeks to criminalize the vocalization/presentation of lived experience. As Kamara deftly points out, crime is not new to Brixton, South London, or other estates in the UK. Instead, now that the reality of these lives are being presented to a wider audience, the move is to criminalize the very existence of these young people, rather than aiming to help address the social/institutional/historical issues that underpin their lives.

67 member Dimzy penned an open letter on the “scapegoating” of drill music, published in Fader in July. In the letter, Dimzy explains that the lyrical content of drill music is based on lived experience:

Unfortunately, for many growing up in today’s society, particularly in inner city areas, the youth is exposed to crime and violence as part of every day life. As drill is a relatively ‘new’ genre of music, you tend to find a lot of the people involved in it are young so I personally am not surprised by the content of the music. They are talking about life as they see it and experiences they have been through, the same as any other artist tends to in any other genre. […]

I will continue to stay positive as my experience goes far beyond what is being portrayed to the country and I hope that people can see beyond the media scapegoating us for the problems in our fragmented society.

To end this post, I want to share a video posted by Channel 4 News (via Independent), that has a local UK drill artist presenting quotes by British MPs “in a bid to highlight the hypocrisy of their own violent language.”